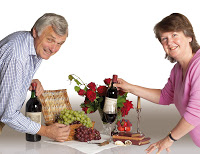 A hamper gift company celebrating 25 years in business has launched new services on its website, thanks to a grant from the Food and Drink innovation Network (iNet).

Lincolnshire-based Hay Hampers has used the Innovation Support Grant (ISG) to develop its website and introduce a system that automatically alerts customers when someone’s birthday, anniversary or special occasion is coming up.

The grant has also allowed Hay Hampers to add a personalised labelling service for its champagnes and wines at its website www.hampers.co.uk – marking the start of the next chapter in the family firm’s life.

The moves are designed to use the latest technology to promote the firm’s fine food and wine hamper gifts all year round, and help increase sales throughout the year.

“Christmas is very important to us, as it’s the time of year that traditionally hampers are sent,” said Rachel Marshall Roberts, who runs Hay Hampers with husband Jeremy in Corby Glen, near Grantham. “But fine food and wine make perfect gifts for birthdays, anniversaries and other special occasions all year round, as well as being ideal for corporate gifts, so we have introduced additional promotion and marketing tools at www.hampers.co.uk.

“The grant has allowed us to install a reminder service to customers, a personalised labelling system for wine and champagne gifts, and will also support the marketing and promotion of these new services. I am looking forward to dealing with companies and private individuals that have a culture of giving and rewarding…people who haven’t got time to go out shopping but want to give something really nice to people.”

Hay Hampers was launched in 1984, and initially began selling hampers to businesses in Leicestershire and the East Midlands, before gradually expanding and gaining customers worldwide. It now offers hampers for a range of occasions from just under £30 to £500.

After receiving an Innovation Support Grant of £7,600, Hay Hampers hopes to increase its penetration into the corporate market and supply hampers as part of company motivation schemes, for golf days and as gifts to employees, customers and clients.

The new reminder service is also aimed at helping customers to remember special birthdays and events, and encourage them to send a gift via Hay Hampers.

“We want to get across the message that a hamper isn’t just for Christmas,” added Rachel.

The Food and Drink iNet Lincolnshire business adviser Rachel Linstead said: “Innovation Support Grants are designed to encourage innovation in businesses, and this project at Hay Hampers fitted the bill perfectly. The firm is making use of new technology, and opening a new chapter in its life.”

The Food and Drink iNet is aiming to foster innovation in the region’s food and drink sector by encouraging businesses to turn new ideas into new business through the development of new technologies and products. It’s also hoping to stimulate new processes, services and ways of working in the industry to help boost the sector.

Around £250,000 in Innovation Support Grants has been allocated to around 50 food and drink firms across the East Midlands by the Food and Drink iNet since the iNet was launched in 2008. The iNet hopes to have more funding allocated as part of a new contract in 2010, said Peter Maycock, Food and Drink iNet project director.

Firms wanting more information should contact the Food and Drink iNet on 0845 521 2066 or visit www.foodanddrink-inet.org.uk

For information about support for innovation that is available in the East Midlands, visit www.eminnovation.org.uk