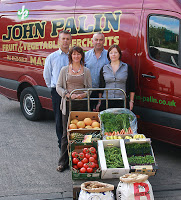 A Derbyshire fruit and vegetable supplier and distributor has demonstrated the benefit to businesses of gaining top industry-recognised accreditation by expanding after winning a hat-trick of new contracts.

Now the firm has won three new contracts to supply fruit and vegetables to hundreds of schools in Derbyshire, Derby, and Staffordshire, as well as to the Chatsworth Estate.

It means John Palin Ltd can take on four new staff and invest in four extra vehicles, and illustrates one way that firms can help themselves to expand and flourish in difficult economic times by taking expert, sector-specific advice.

“Increasingly, large organisations will only do business with firms that have accreditations, so it makes good sense to put the correct systems in place to gain them, just as John Palin has done.

“Their experience illustrates how the Food and Drink Forum can help businesses in the sector to move into new markets, gain new customers, win additional business, and develop, even during challenging economic times.”

John Palin finance manager Ann Newton, who is one of the owners of the company along with her husband David, and Neil and Karina Norman, said: “BRC accreditation was something that we needed to do. All our competitors had BRC accreditation so we knew it was the way forward. Richard Wigley’s knowledge and expertise was invaluable. We are so pleased that we have won new contracts on the back of gaining BRC and that we have been able to take on new staff.”

The firm, based at Tansley near Matlock, has been supplying fruit and vegetables in Derbyshire and beyond for more than 150 years. It supplies to semi-wholesalers, shops, caterers, pubs and restaurants, sandwich manufacturers, prisons and schools within a 150-mile radius, going into counties such as Nottinghamshire, Lincolnshire, Yorkshire, Leicestershire, Staffordshire and Cheshire.

David and Neil had worked for Palins for more than 25 years before a management buy-out in 2004.

The company won the Chatsworth contract last year, to supply the estate and the farm shop. Earlier this year the firm won a contract to supply fresh fruit and vegetables, prepared vegetables and eggs to around 90 Staffordshire schools in the Tamworth and Burton-on-Trent areas.

Now John Palin has learnt that it has been successful in tendering to supply to 235 schools and social care units in Derbyshire and about 100 in Derby city. The firm previously supplied some Derbyshire schools but the new contract marks a significant increase in numbers.

The contracts for the schools and social care units alone will represent approximately £600,000 increase in turnover a year for the company.

“We are delighted to have won three major contracts since achieving our BRC in 2009. It has really opened doors for us, and we are very grateful for the support and expertise provided by The Food and Drink Forum. It’s been invaluable,” said Ann.

The firm has also won a place on the NHS Framework, which means it can bid for NHS contracts in the future.

John Palin employs more than 45 people at its Brookfield Industrial Estate headquarters. The firm achieved BRC certification in food storage and distribution to the highest level after receiving a range of specialist support from Richard.

He helped John Palin to complete a quality and HACCP manual, audited the company before the BRC audit to ensure the firm was compliant, dealt with technical questions from the auditor on the day of the audit, and carried out some HACCP training at the firm.

Richard has continued to support the firm and carries out a regular external audit to ensure that John Palin remains compliant.

The Food and Drink Forum is a membership-led business support organisation which works across the East Midlands and beyond. It is based at Southglade Food Park, Gala Way, Nottingham, and has members across Derbyshire, Leicestershire, Nottinghamshire, Lincolnshire, Rutland and Northamptonshire.

Firms wanting more information should contact Richard Wigley at The Forum on 0115 9758810 or richard.wigley@foodanddrinkforum.co.uk.