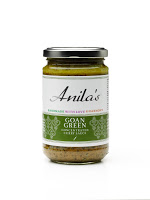 The Goan Green Curry Sauce produced by Anila’s Authentic Sauces has been short listed in this year’s FreeFrom Food Awards.

The awards celebrate the innovation and imagination shown by the food industry in creating foods that do not include one or more of the ingredients wheat, gluten, dairy products, eggs, yeast, soya, and sugar which can be associated with health problems in some people.

Anila’s sauces are based on a traditional family recipe, made from the freshest ingredients in small batches. They are free from artificial colours, additives and preservatives, and are sugar, dairy and gluten free, and contain no onion or garlic.

The company, based in Walton-on-Thames, Surrey, and with a manufacturing unit in Hounslow, produces eight varieties of curry sauce and 16 types of a mix of pickles, chutneys and dips.

It has won a number of awards for its products, including a host of Great Taste Awards.

“We are delighted to hear that the Goan Green Curry Sauce has been short listed in the 2012 FreeFrom Food Awards,” said Anila Vaghela, who runs the company and who sold her first curry sauce 20 years ago at a fair in Weybridge, Surrey. “It’s one of our most popular sauces.”

More than 300 products were entered in the 17 categories of the awards, with Anila’s Goan Green Curry Sauce short listed in the FreeFrom Ingredients category. The winners of the 2012 FreeFrom Food Awards will be announced and presented with their certificates by chef Antony Worrall Thompson at an event in West India Dock on April 17th.

The firm supplies hundreds of outlets that include speciality food halls, garden centres, delis, farm shops, gift shops and also health stores. It also sells direct to the public at farmers’ markets and at food shows and festivals as well as online via www.anilassauces.com

Products are on sale at places like Harrods, John Lewis Oxford Street and Bluewater, Chatsworth Farm Shop, and Booths in Penrith.