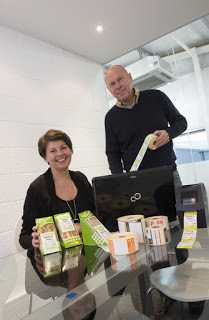 The Food and Drink iNet has awarded a £10,000 grant to a Derbyshire labelling company to help the firm create a new labelling system for sandwich producers.

Positive ID Labelling Systems, based in Melbourne, near Derby, is developing a system which will allow small food retailers to easily add typical nutritional data and allergy information to labels on each product.

The company already sells a range of sandwich label printers and software to allow companies to personalise and print their own labels, but now it plans to also offer a system that will give small independent shops the ability to include the nutritional information of their products on labels.

The Food and Drink iNet, which is run by trade organisation The Food and Drink Forum and encourages and supports innovation in the East Midlands food and drink sector, has awarded the project £10,000 towards its £30,500 cost.

“This is an excellent example of an established company using innovation to develop and grow, while at the same time filling what it sees is a gap in the market in the food and drink sector and benefiting a good number of smaller manufacturers,” said Food and Drink iNet director Richard Worrall.

“The Food and Drink iNet is pleased to support this innovation at Positive ID Labelling Systems.”

Part-funded by the European Regional Development Fund (ERDF), the Food and Drink iNet aims to build on the tradition of innovation in the food and drink industry in the region by helping to create opportunities to develop knowledge and skills, and to help research, develop and implement new products, markets, services and processes.

It is managed by a consortium, led by the Food and Drink Forum and including Nottingham Trent University, the University of Lincoln, and the University of Nottingham. It is based at Southglade Food Park, Nottingham, with advisors covering the East Midlands region, who can offer a range of support to small and medium-sized enterprises that work in the sector.

It currently employs 11 people at its headquarters in Castle Lane, Melbourne, and hopes the new product it is developing will create another job within the next 12 months.

Managing director John Mayers said: “The objective is to devise a computer-based reference that integrates with a spreadsheet to allow small businesses to accurately label nutritional and allergy data on their food and sandwich labels. This system will ensure correct ingredient, nutritional and allergy information is incorporated on food labelling. It will serve to protect consumers by providing accurate labels and protect firms from the potentially damaging consequences of mislabelling.

“We are very grateful for the support from the Food and Drink iNet, who have given us a grant towards our project.”