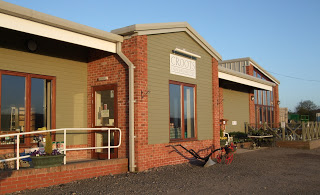 Work is due to begin shortly on a side extension to the café which will allow the farm shop in Wirksworth Road, Duffield, to serve more than twice as many customers.

Plans are also in the pipeline for phase 2 of the expansion work, which could see a further extension at the front of the café to build a conservatory over the existing decking area – to create a space that can be used all year round.

This would allow Croots to serve up to four times more customers than it does currently.

The move is expected to create an extra four or five jobs to add to the 20-strong team currently employed at Croots Farm Shop, which opened in June 2008.

“Our coffee shop has been very popular since day one, and we’ve been thinking of expanding it for quite some time,” said Steve Croot, who runs the farm shop at Farnah House Farm.

“Initially we plan to extend out from the side, which will give us space for around 30 more seats. We’re hoping that work will start during February and that the new extended coffee shop will be open in May.

“We also have planning permission to extend over the decking area and create a conservatory, which we may do in the future.”

Amber Valley Borough Council approved plans for a single storey side extension and a conservatory to the front of the farm shop in December.

The expansion project marks a significant investment for the farm shop which was a runner-up in the Best UK Independent Food Retailer 2010 category of the Observer Food Monthly Awards and named in The Independent’s top 50 best food shops the year before, said Steve Croot.

The extension will match the existing brickwork and roofing.

The farm shop sells a range of food and drink produced locally, regionally and from further afield. It stocks products from up to 40 producers from within a 50-mile radius of the shop.

It also produces its own range of products, including sausages, pies and ready meals. Since establishing in 2008, it has built up a strong reputation for its butchers’ fresh meat counter – winning dozens of awards for home-made sausages, home-smoked bacon and other meat products.

“We’re really looking forward to the next phase in the development of Croots Farm Shop,” said Steve Croot, who was shortlisted in the Food Hero category of the Derbyshire Food and Drink Awards this year. “We’ve had great support from our customers, and we hope they will like and enjoy our new expanded coffee shop when it opens.”