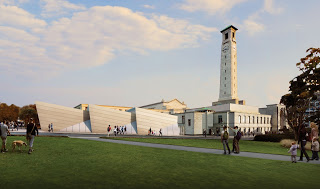 Project manager Focus Consultants is celebrating after a scheme the company was involved in scooped a key Civic Trust Award.

SeaCity Museum in Southampton was one of 32 projects across the country to receive one of the awards, which are given to projects that make an outstanding contribution to the quality and appearance of the environment.

Focus, which is based at Phoenix Business Park in Nottingham, and has offices in Holborn, London, Endeavour Park, Boston, Princess Road East, Leicester, and Aubourn, Lincoln, was the project manager for SeaCity in conjunction with Southampton City Council.

The £15 million maritime museum opened in 2012 – 100 years after the ill-fated Titanic set sail from Southampton – and development involved converting the grade II* listed former Magistrates’ Courts adjoining the Civic Centre, Southampton City Art Gallery and the Guildhall. It is the centre piece of a major regeneration of the city’s new Cultural Quarter.

“Focus Consultants is proud to have been part of the team that developed Southampton SeaCity Museum, and we are delighted to hear the news that it has won a prestigious Civic Trust Award,” said Focus Consultants partner Steven Fletcher.

The Civic Trust Awards is the longest standing architectural and built environment awards scheme in Europe, having been established in 1959. Civic Trust Award level schemes must demonstrate excellence in architecture or design, sustainability, inclusive design and make a positive social, cultural, environmental or economic benefit to the local community.

Building constructor for SeaCity was Kier Construction and architect was Wilkinson Eyre Architects, with the exhibitions being designed by Urban Salon and installed by 8Build.

Focus Consultants supported the City Council in development of the Heritage Lottery Fund applications for round 1 and round 2 of the SeaCity project. The company acted as project manager for the whole scheme, including the building and exhibition works, and also contract administrator for the exhibition works.

Focus is a multi-disciplinary company which specialises in creative approaches to securing funding packages and delivering high quality projects across the Midlands and the UK. Focus has secured more than £900 million of grant assistance, and delivered more than £1 billion of projects and programmes since 1994.