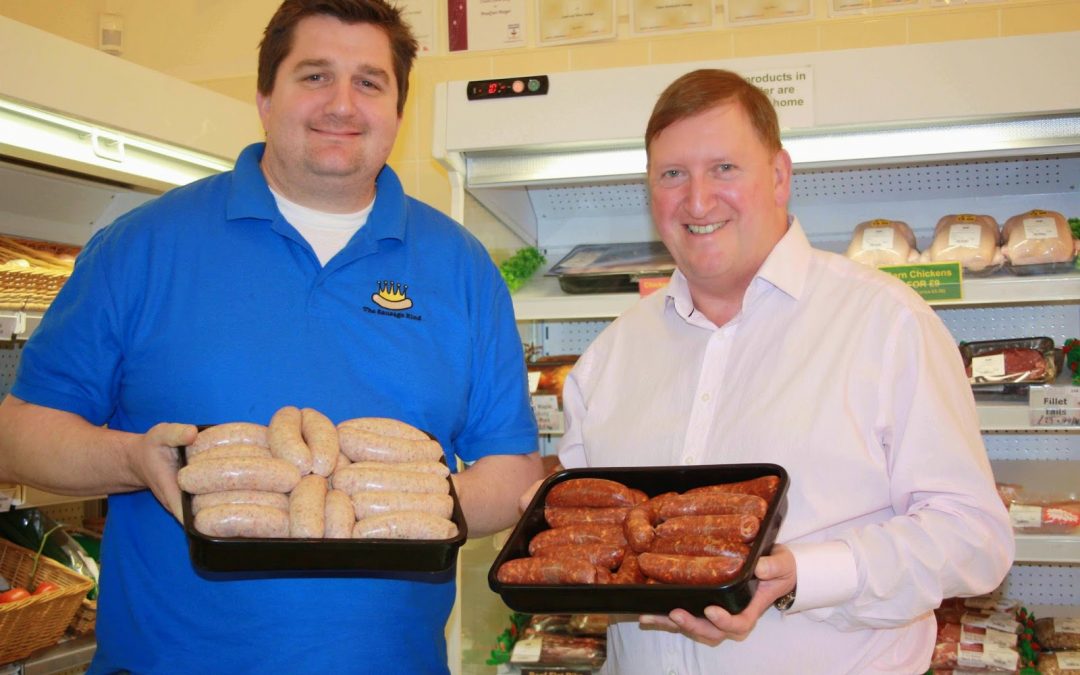 Expert sausage taster the Sausage King has described the
bangers produced at Croots Farm Shop in Derbyshire as “a stunning array of
sausage perfection”.
Stephen Plume, who runs a website dedicated to sausages, is
one of the UK’s leading sausage experts and has been dubbed the Sausage King
for his efforts to promote tasty British bangers.
He visited Croots Farm Shop near Duffield in Derbyshire as
part of an on-going pledge to visit some of the nation’s finest sausage
producers.
A teacher by profession, Stephen has undertaken the
challenge of dropping in on as many of the high-quality butchers listed on his www.sausagefans.co.uk website as he can.
During his visit to Croots at Farnah House Farm, Wirksworth
Road, he had a go at making sausages, learnt more about how the butchers
develop and create the range of award-winning bangers, and gave his verdict
after the all-important taste test.
“You have an eclectic mix that’s really well made and tastes
great,” he told owner Steve Croot.
During his visit he tried a number of different sausages,
including the Ecclesbourne County Classic, designed by year 10 students at
Ecclesbourne School as part of the food technology course, which he described
as ‘really good. A lovely balance of flavours’; the wild mushroom sausage,
which he hailed as ‘awesome’; the lamb and mint sausage, which he said was
‘absolutely superb’ and the chorizo sausage, which he loved.
“It’s hard to come up with a winner,” said Stephen, who is
based in East Anglia. “It’s a stunning array of sausage perfection.”
Steve Croot, who opened the shop in 2008, said: “Stephen is
a real expert on sausages, so we were delighted to host a visit from him and
even more chuffed when we heard how much he rated our sausages. As a big fan of
sausages myself, it was great to talk over ideas for new sausage flavours and
between us we hit on one which we’ll have a look at developing and will send to
the Sausage King to try.”
Croots Farm Shop, based at Farnah House Farm, Wirksworth
Road, has won scores of awards for its home-produced sausages, including Great
Taste Awards, which are the ‘oscars’ of the fine food industry. The farm shop
is renowned for creating unusual and original flavours, as well as more
traditional bangers. Croots’ butchers enjoy creating new sausages to mark
occasions, such as the Olympics or the World Cup, with a percentage of sales
going to charity.
The pork used in Croots sausages comes from Packington Free
Range Pork, in Staffordshire, while the beef hails from R & M Heath
(Richard & Margaret) at Hazelwood Hall Farm, Hazelwood, Derbyshire.
The shop employs three full-time butchers and two assistant
part-time butchers, as part of a 28-strong workforce employed in the shop and
the restaurant, Shires Eatery.
Launched in 2008, Croots Farm Shop is open Monday to
Saturday from 9am to 5pm (Shires Eatery until 4.30pm) and on Sundays from 10am
to 4pm. Croots runs Fresh Fish Thursdays between 10am and 4pm on Thursdays.
For more
information visit www.croots.co.uk
Press release issued by Nottingham PR company Perfect 10 PR www.perfect10pr.co.uk