Focus Consultants in the driving seat at museum redevelopment 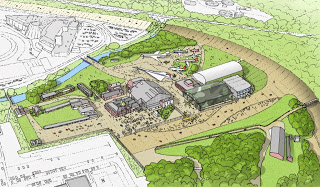 Focus Consultants is playing a key role in the redevelopment
of one of the UK’s most historically significant sites for motoring, aviation
and engineering after helping Brooklands Museum secure a grant of more than
£4.5 million.
The company has been appointed as project manager on the
scheme at the museum in Weybridge, Surrey, which is the birthplace of British motorsport and aviation, home of
Concorde and the site of many engineering and technological achievements
throughout eight decades of the 20th century.
The redevelopment will transform the museum’s Grade II
listed Second World War Wellington Hangar into The Brooklands Aircraft Factory;
build a new annexe (the Flight Shed) to house more of the museum’s outstanding
collection of historic aircraft; and restore the Finishing Straight of the
Brooklands Race Track, the world’s first purpose-built motor-racing circuit.
The Focus team was also instrumental in helping the museum
to secure £4.681 million funding from the Heritage Lottery Fund (HLF) for its
Brooklands Aircraft Factory & Race Track Revival Project.
Associate at Focus Consultants, Eleanor Clarke, said: “We
were very pleased to hear about the HLF investment in this significant
redevelopment at what is a very important site for the history of motoring,
aviation and engineering.
“The team at Focus is now working on delivering this
exciting project, which also aims to inspire current and future generations to
embrace science, technology and engineering, and will include a training scheme
for volunteers in historic aircraft restoration and a raft of new activities on
the Race Track.”
Nottingham-based Focus Consultants, which also has offices
in Holborn in London, Leicester, Boston, and at Aubourn near Lincoln, has
worked on projects at a number of British museums, including the Victoria and
Albert Museum, the Imperial War Museum, the Charles Dickens Museum, MSHED
Museum of Bristol and Sea City in Southampton.
Focus specialises in creative approaches to securing funding
packages and delivering high quality projects across the UK. Since its creation
in 1994, Focus has helped to secure
more than £953 million of grant assistance for a range of projects and
businesses across the UK and delivered more than £1.1 billion of
projects and programmes.
The firm works across a range of sectors including heritage,
museums, arts and culture, education and tourism. It is based at Phoenix
Business Park, Nottingham, and this year celebrates its 21st
anniversary.
The Brooklands Race Track was opened in 1907 and marked the
start of organised motor racing in the UK. Within a year, early experiments in
aviation were taking place on the site as well. From these beginnings,
Brooklands rapidly evolved into an outstanding centre for the development and
operation of racing cars, motorcycles and aircraft. The first person to travel
over 100 miles in one hour, Percy Lambert, did so at Brooklands in 1913. The
first British Grand Prix took place at Brooklands in 1926, as well as the first
public demonstration of powered flight in the UK in 1909.
The redevelopment involves relocating the museum’s
Wellington Hangar, built in 1940 on top of the Finishing Straight of the Race
Track and used for the assembly of Wellington bombers and later for a variety
of other industrial purposes. It now houses the museum’s famous Wellington “R”
for “Robert” recovered from Loch Ness in 1985 and restored at Brooklands, and
numerous other aircraft. Under the HLF-funded project, the hangar will be
completely restored on a new site adjacent to its current one, allowing the
Finishing Straight of the Race Track to be brought back into use for both
motoring and aviation activities. The hangar itself will be presented as an aircraft
factory.
The museum has raised more than £1.9 million in match
funding for the project and is currently fundraising for the remaining £260,000.
Including preparation and development work already undertaken, the complete
cost of the project will be some £7 million, making it the largest endeavour
the museum has ever embarked on.