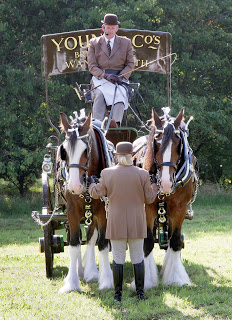 Twelve months after attracting hundreds of people to
its first ever open day, the Shire Horse Society is preparing to throw open its
gates once again.
Visitors to this year’s event on 13th
September at Shire Farm, Rockingham Castle, will have the chance to find out
more about the gentle giants of the horse world and see them in action.
Featuring demonstrations, the event will celebrate the
survival of a breed that nearly died out a century ago, but is still
endangered. It will also mark the second anniversary of the opening of the
national charity’s headquarters at Rockingham, near Corby, on the
Leicestershire/Northamptonshire border.
“Last year’s event was a great success and we were
delighted to welcome so many visitors to our headquarters,” said Shire Horse
Society secretary David Ralley-Davies.
“We hope that Shire horse lovers will support us again
this year. Our event gives us the opportunity to raise awareness about the
place the breed has in history and why it is important for us to protect Shires
for the future. It also enables us to raise much-needed funds to continue the
work of the Shire Horse Society charity.”
The Shire Horse Society is the only charity dedicated
to the protection, promotion and improvement of the Shire horse. Since 1878 the
organisation has been working to protect the breed, which was then known as the
Old English Breed of Cart Horse.
It moved to Rockingham Castle from its previous
headquarters at the East of England Showground near Peterborough in 2013.
The event on 13th September will include
drays from Thwaites Brewery and Youngs Brewery, ridden and in-hand displays,
and the chance to see Shire horse foals. A meet and greet with Shires will take
place at 1.30pm, with a parade scheduled for 3pm. There will also be a bouncy
castle, stalls and refreshments.
The event, which runs from 11am to 3pm on Sunday 13th
September, is free to enter for Shire Horse Society members, or costs £5 for
adults. Entry is free for children under 12.
All profits go to the Shire Horse Society Charity,
which runs the Save Our Shires campaign to protect the breed for years to come.
For more information visit www.shire-horse.org.uk
or follow the charity on Facebook or Twitter – https://www.facebook.com/shirehorsesociety
and @saveourshires
Press release issued by Nottingham PR company Perfect 10 PR www.perfect10pr.co.uk