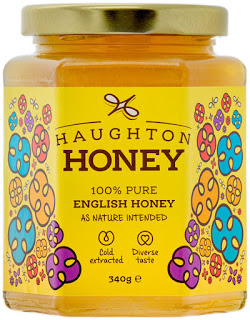 This year’s honey harvest is likely to be about a third of the size of last year’s crop after poor weather affected nectar flow, says bee
farmer Cris Reeves.
Wet weather and
cooler temperatures during key times of nectar production over the
spring and summer have led to
a dramatic drop in the amount of honey harvested across the country this season.
But stocks of
Haughton Honey remain buoyant thanks to a bumper honey harvest in 2014 and the
cooperative’s
approximate 1,600 hives spread
across the North West and the Midlands, including Cheshire, Staffordshire,
Shropshire and Warwickshire says
Cris.
“The honey crop
can fluctuate quite widely from one year to the next and, in the main, it’s all down to the weather,” he explained. “2013
was an atrocious year
as we had a very long winter
and spring never really got going. Last year was really very good by comparison. Bee farmers
that contribute to the Haughton Honey brand harvested more than 24,000 kilos of honey during 2014. This year, however, it looks like these
hives will produce little over 10,000 kilos – significantly less than half of what was collected last year. After talking to bee farmers across the country, it
looks likely that the honey harvest generally could be around a third of last
year’s crop. Matters could become very seriously compounded if next year turns out to be similar
to this one though.
“We have enough
volume to supply our existing customers and take on new ones, but we’re hoping that next year proves to
be a better year weather-wise for the bees and for the livelihood of bee
farmers, who play an extremely important role within the natural ecosystem and
who receive no farming subsidies from the European Union.”
Honey bees collect
nectar to deposit into
honeycomb cells before it is turned into honey, so adverse weather at key times
of nectar production impacts on the amount of honey available in a season.
Cris launched
Haughton Honey last year and supplies more than 60 stores, currently
across the North West and the
Midlands but with plans to expand throughout the UK.
Although the
honey harvest has dropped dramatically and there is likely to be less of a
honey harvest across much of England, he and his fellow bee farmers hope that
this won’t lead to a shortage of British
honey as stocks from last year were high. Honey is the only food product that
doesn’t deteriorate over time, added Cris,
who has been a bee farmer for more than ten years.
“We’re still processing, but there
definitely won’t be anywhere near as much English honey around this
season as a result of the weather,” said Cris. “News
in the South East is slightly better, but across most of the UK
including the North West,
Midlands, South West, Wales and other areas it’s been a similar picture.”
Poly-floral, or wildflower honey, is harvested twice a year – usually
during May and August.
Haughton Honey
is raw honey which comes straight from the hive, is cold extracted and never
pasteurised which means that it retains all of the natural enzymes and proteins
that make English honey so special. Haughton Honey is 100% natural and pure,
and features traces of dandelion, chestnut, blackberry, clover and other
wildflowers.
Earlier this
year, Haughton Honey was named as one of ten short-listed products in the sweet
preserves category of the Great British Food Farm Produce Awards 2015, run by Great
British Food Magazine.
For more details visit www.haughtonhoney.com
Press release issued by Nottingham company Perfect 10 PR www.perfect10pr.co.uk