Time to celebrate for Focus Consultants 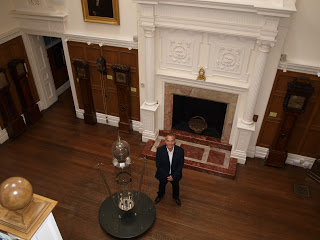 Funding,
economic development and project management specialist Focus Consultants is
celebrating the news that the Heritage Lottery Fund (HLF) has earmarked a £2.8
million grant for the British Horological Institute (BHI).
Focus developed
the HLF bid for the BHI, which plans to create a National Centre for Horology
at its Upton Hall base, near Newark in Nottinghamshire, to help train a new
generation of clock and watchmakers in the UK.
The project is
the first phase of an £8.5 million Masterplan that Focus has developed for the
site.
Dudley Giles,
Chief Executive Officer of the BHI, praised the work of Nottingham-based Focus
Consultants, which also has offices in London, Leicester and at Boston and
Aubourn in Lincolnshire.
“The team at
Focus Consultants has been great – we literally couldn’t
have done it without them. Their advice and guidance has been spot on and we
really feel that they are part of the BHI team, helping us to take the project
and the Masterplan through to completion,” he said.
Focus
Consultants Partner Kevin Osbon, who lives just two miles from Upton Hall, led
the creation of the long term Masterplan for the BHI and the consequent
development of the initial Phase 1 ‘Saving Time’ project which has secured the
HLF award.
He said: “I
have been working on this project personally since August 2013 and the team at
Focus Consultants have worked closely with the BHI to create a long term
sustainable solution for the Upton Hall estate and secure their future as one
of the leading horological training establishments in the world. I am delighted
to hear that the HLF bid has been successful.
“Focus works with
organisations and attractions across the UK, but the BHI is a close neighbour,
being based in Nottinghamshire, and members
of the Focus team are really looking forward to working with the BHI team to
deliver phase 1 and then the overall Masterplan ‘over time’.”
The BHI – a
membership organisation for people who make, repair, collect and sell clocks,
watches and other timepieces – plans to open the new centre in 2018 to address
the nationwide shortage of horologists by creating new training and workshop
facilities in a derelict stable block and glass house, allowing the BHI to
double the number of students it trains a year.
Historic England
has included Upton Hall – a Grade II* listed building – in its 2015 Heritage at
Risk Register.
HLF has
earmarked £2,852,600 for the project including a Development Grant of £160,300,
which the BHI will use to progress plans, produce a fully costed proposal,
apply for planning permission, and submit a second round application, when the
full grant amount will be released.
The centre will
be open daily and the public will be able to view students at work and visit
exhibitions with key pieces from the BHI collection, which includes clocks
going back to the 17th century, watches such as the timepiece carried by
Captain Scott on his ill-fated expedition to the Antarctic, and the first two
Speaking Clocks.
The historic
main building at Upton Hall will also be developed and access to the collection
will increase significantly with volunteer support and extended opening hours.
The centre anticipates thousands of visitors annually, including hundreds of
schoolchildren for whom special education areas will be set up. Collected from
1858, there are currently over a thousand artefacts on display and stored in
the reserve collection of the BHI, and as such it is unrivalled in the UK but
currently only open for public view three times a year.
Sir Peter Luff,
Chair of HLF, said: “From Big Ben and the Liver Building to the pocket watches
and timepieces carried by great explorers, clocks and clockmaking have a long
and proud history in the UK. Even as demand for these traditional skills rises,
the number of people trained has gone into steep decline. That is why we saw a
pressing need for this National Lottery investment which will ensure timepieces
are made, serviced, repaired and conserved in this country for many years to
come.”
Emma McClarkin, an East Midlands MEP with a portfolio
on international trade, said: “It is well known that there is a dire shortage
of training opportunities for watch and clockmakers around the world,
particularly in Europe. The BHI already has an international reputation and
links with our local universities. Now the creation of the National Centre for
Horology sets the Institute on course to address the horology skill shortage,
making sure that our watch and clockmaking expertise is passed on from
generation to generation, just like our magnificent timepieces.”
Focus specialises in creative approaches to securing
funding packages and delivering high quality projects across the UK. Since its
creation in 1994, Focus has helped to secure more than £953 million of grant
assistance for a range of projects and businesses across the UK and delivered
more than £1.3 billion of projects and programmes.
http://www.focus-consultants.com
Press release issued by Nottingham based pr company Perfect 10 PR www.perfect10pr.co.uk