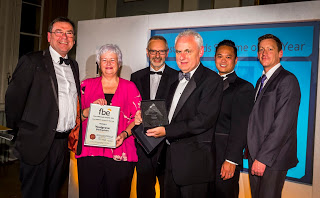 A small Derbyshire housing scheme has been crowned as the overall
project of the year at the East Midlands fbe Awards 2015.
Category award winners also included the refurbishment and
regeneration of the Malt Cross in Nottingham and the development of a new HQ
for the Rutland Agricultural Society and new society and clubhouses for Oakham
Rugby Club and Royce Rovers Football Club.
At a sell-out ceremony staged at the City Rooms in
Leicester, around 150 people from the region’s construction sector gathered to
hear about the schemes and the teams behind this year’s winning projects.
The overall winner was a scheme of six houses and two
bungalows at Hannah Bowman Way in Youlgrave, Derbyshire, developed by emh group
and built by Lindum Construction for Peak District Rural Housing Association
and Youlgrave Community Trust. Emh group and Lindum Group jointly nominated the
project. Other members of the team involved in the development of the mix of
affordable rent and shared ownership homes with priority for local people were
architect David Lewis Associates, structural engineer HSP Consulting and Low
Carbon Box.
The project, which had earlier taken the honours in the
residential category, lies in the Peak District village of Youlgrave and marked
the culmination of many years of work. The Code for Sustainable Homes level 4
homes were provided as a result of a local partnership between emh group, Peak
District Rural Housing Association and Youlgrave Community Land Trust, with
support from Derbyshire Dales District Council, with the design developed in
close consultation with the Peak District National Park Authority.
Judges said: “We found it
a difficult decision to pick the overall winner, as there were three excellent
section winners, of varying scale and type. However, we thought that the
Youlgrave project ticked so many boxes in terms of development, design,
community engagement and team work, and we felt it was a very deserving winner
of the East Midlands fbe Project of the Year.
“This scheme
took a considerable time to accomplish and was obviously a battle on many
fronts, not least in terms of planning, where a ‘village green’ application had
to be overcome, delaying matters by over 18 months, due to there being
objectors in the local community. Achieving Code for Sustainable Homes level 4
including all the enhanced ecology is quite an achievement given a tight
budget, and overall the project achieves a very sensitive and socially valuable
outcome, produced to an excellent quality standard of construction, all of
which will have taken a significant effort to achieve.”
The winner of the regeneration category was The Malt Cross,
Nottingham – the refurbishment of Nottingham’s only surviving Victorian music
hall, built in 1877, and one of relatively few in the country. It was undertaken
by the Malt Cross Charitable Trust, and nominated by William Saunders
Partnership, who were the architect and structural engineer for the project.
Other team members were contractor Taylor Pearson the contractor and EP
Consulting, who handled the M & E design.
The project brought to life derelict floors and uncovered
heritage features that had lain hidden from public view and reconnected the
previously sub divided building back into one entity. The Malt Cross Music Hall
is occupied by a social enterprise café bar. It is also an entertainment and
arts venue which supports local talent. In addition it houses the Malt Cross
Trust’s outreach services, including Street Pastors and Safe Space.
A new HQ for the Rutland Agricultural Society and new
society and clubhouses for Oakham Rugby Club and Royce Rovers Football Club won
the non-residential scheme category. Submitted by developer and main contractor
DW Hicks, other members of the team were LE1 architects, structural engineer
Diamond Wood & Shaw and MDA Consulting.
The scheme created a new-build exhibition/function space and
offices for the Rutland Agricultural Society (RAS) with an attached clubhouse
and changing rooms for Oakham Rugby Club. A detached pavilion provides separate
changing facilities for Royce Rangers Football Club.
Jef Todd, regional chairman of the East Midlands fbe, said:
“We had a record-breaking number of submissions entered for this year’s awards,
which was great. The diversity of the finalists and the winners illustrates the
tremendous variety of top quality construction projects that are undertaken in
the region. I’d like to thank everyone who entered and congratulate the winners
and the teams behind the schemes.”
Compèred by former BBC East Midlands political editor John
Hess, the awards were sponsored by construction recruitment specialist Hays
Recruitment, civil engineering, building and M&E contractor North Midland
Construction, engineering and environmental consultants M-EC Consulting
Development Engineers, DW Hicks Building Co Ltd and chartered accountants and
business advisers Duncan & Toplis. Civil and structural engineering company
BSP Consulting sponsored the evening’s drinks reception.
The East Midlands fbe (Forum for the Built Environment), a property,
development and construction professionals’ group, supported the East Midlands
NSPCC ‘now I know’ Appeal at the event, which had finalists from across
Derbyshire, Leicestershire, Nottinghamshire, Lincolnshire and Rutland.
Press release issued by Nottingham PR company Perfect 10 PR www.perfect10pr.co.uk