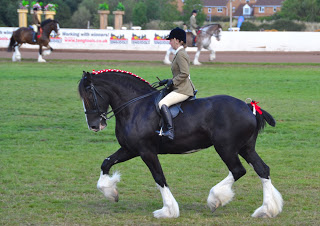 History will be made at this year’s Shire Horse Society
National Show when, for the first time, British heavy horses will be able to
qualify for a golden ticket to a ridden class at the prestigious Horse of the
Year Show.
Riding heavy horses has become increasingly popular, and now
HOYS is adding a British Ridden Heavy Horse championship to its event, which
takes place at Birmingham’s NEC from Wednesday 5th to Sunday 9th October 2016.
The first ever qualifying round for the championship will be
held at the Shire Horse Society’s National Show, which runs 18th to
20th March 2016 at the Staffordshire Showground.
Wendy
Toomer-Harlow, a founder member of the British Ridden Heavy Horse Society and a
council member of the Shire Horse Society, said: “The BRHHS have been in
talks with Hoys for some time regarding a British Ridden Heavy Horse
Championship and we are very grateful to Grandstand Media for agreeing to
hosting this new HOYS ridden qualifier.
“This
championship will give heavy horse riders the opportunity to showcase our four
magnificent indigenous British heavy horse breeds, the Shire, Clydesdale,
Percheron and Suffolk to both a national and international audience and
display to people just what these versatile heavy horse breeds are capable of
under saddle alongside their established draught uses.
“The
Shire Horse Society National Show will host the first ever Horse of the Year
Show Ridden Heavy Horse qualifying round and in doing so the society will take
its place in the history of ridden showing. This is a very exciting time for
all those enthusiasts who are involved in the world of heavy horses and passionate
about the furtherance and promotion of our British breeds of Shire,
Clydesdale, Percherons and Suffolk going forward into the 21st
Century.”
The
Shire Horse Society National Show is the world’s largest gathering of Shires,
with around 200 due to be put through their paces – shown in-hand, ridden and in harness.
The show, which has been held at a
limited number of venues in England over its long history, is believed to be
one of the oldest, almost continuous, horse shows in the world, having been
held for the first time at the Royal Agricultural Hall in Islington, London, in
1880, when the charity was named the English Cart Horse Society.
This
year it returns with a new venue and a new format – running over three days
instead of two and being held for the first time at the Staffordshire
Showground, to cater for a growing interest in the event. The ridden classes, including the qualifying class for
the HOYS championship, are being held on Friday 18th March and will
also feature dressage and concours d’elegance to highlight the grace and
elegance of the gentle giants of the horse world.
Shires will be shown in all their
glory on Saturday and Sunday in the in-hand and harness classes.
Thousands of visitors are expected
to attend the show, which is the flagship event of the Shire Horse Society – the only
charity dedicated to the protection, promotion and improvement of the Shire
horse.
The iconic breed was in danger of dying
out just a few decades ago, and even now fewer than 500 new foals are
registered every year by the Shire Horse Society.
The charity has been running a Save Our Shires
campaign to raise awareness about these gentle giants and numbers have steadily
increased, thanks to the dedication of a band of enthusiasts.
Tickets for the show, which also includes stalls and
exhibitor stands for the public to browse, are now on sale via the Shire Horse
Society’s website www.shire-horse.org.uk Follow the charity on Facebook or Twitter – https://www.facebook.com/shirehorsesociety and @saveourshires
The event takes place from noon to 6pm on Friday 18th
March, from 8am to 6pm on Saturday 19th March and from 8am to 4pm on
Sunday 20th March 2016.
Tickets cost £4 in advance and £5 on the gate for
Friday 18th March. Tickets in advance are £8 for adults and £6 for
under 12s and seniors, and £12 for adults and £10 for under 12s and seniors on
the gate, on Saturday 19th and Sunday 20th March.
Entry is free for Shire Horse Society members.
Press release issued by Nottingham based pr company Perfect 10 PR www.perfect10pr.co.uk