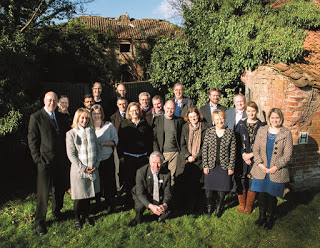 A
team of experts has been assembled to spearhead the creation of a national
Centre for Horology at Upton Hall, near Newark.
Last
October it was announced that the Heritage Lottery Fund (HLF) had earmarked a
£2.8 million grant for the BHI to develop a new centre of excellence to help
train the next generation of clock and watchmakers in the UK.
The
project – known as Saving Time – is the first phase of an £8.5 million masterplan
that Nottingham-based funding, economic development and project management
specialist Focus Consultants has developed for the site.
Now
a team has been appointed to progress plans, produce a fully
costed proposal, apply for planning permission, and submit a second round
application to the HLF before the earmarked grant can be released.
“I am
delighted that we have now appointed a team of experts to support the British
Horological Institute as we move into the next phase of making our plans a reality,”
said Dudley Giles, chief executive officer of the BHI. “Work on Saving Time is
now in full swing.”
The
team appointed by the BHI includes Focus Consultants as project manager, bid
planner and quantity surveyor, Newark-based Guy Taylor Associates as
architects, Newark-based William Saunders as civil and structural engineer, and
Hertfordshire-based mechanical and electrical engineers SVM. Other members of
the team are activity planners Oakmere Solutions Ltd based in Ipswich and
Cambridge, access consultants Jane Toplis Associates, from Bath, fundraising
consultants Judith Egerton and Nancy Chambers, from Gloucestershire, and
Swinton-based exhibition designer PLB.
“This
is the next stage in the process of securing the grant from the HLF,” said
Focus partner Kevin Osbon. “Focus and architects Guy Taylor Associates have
been involved in the long-term planning of the scheme right from the start and
for around three years now, so we’re really pleased to be part of the team
going forward, along with a number of other professionals who have expertise in
developing exciting and innovative projects like the one being undertaken at
Upton Hall.”
The
realisation of the masterplan will eventually see the refurbishment of Upton
Hall – a Grade II* listed building, which is included in the Heritage at Risk
register kept by Historic England.
The BHI priority in the masterplan is training and education. This
is to address the UK-wide shortage of horologists by creating new training and
workshop facilities, allowing the BHI to double the number of students it
trains over the coming years.
The facilities created during Saving Time include new clock and
watch workshop spaces in a former stable block and glasshouse adjacent to Upton
Hall. Saving Time will also include the refurbishment of the ground floor of
the west wing of Upton Hall.
Focus, which also has offices in London, Leicester, Boston and
Aubourn in Lincolnshire, specialises in creative approaches to securing funding
packages and delivering high quality projects across the UK. Since its creation
in 1994, Focus has helped to secure more than £953 million of grant assistance
for a range of projects and businesses across the UK and delivered more than
£1.3 billion of projects and programmes – making it one of the most successful
companies of its kind.
For more information visit www.focus-consultants.com
Press release issued by Nottingham PR company Perfect 10 PR www.perfect10pr.co.uk