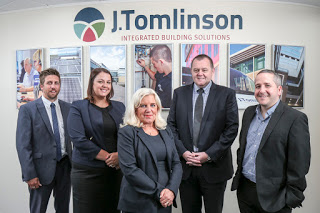 Growing construction services company J Tomlinson has opened a new West Midlands headquarters after experiencing expansion in the region.
At the same time, the firm is creating around ten additional posts.
The company has transferred its West Midlands base from a site in Birmingham to larger offices in London Road, Canwell, near Sutton Coldfield.
The move follows a number of significant contract wins and an expansion in the number of staff employed in the region by the construction, refurbishment, repairs and maintenance, mechanical and electrical engineering, facilities management, and energy efficiency and renewables firm.
“J Tomlinson has worked in the West Midlands for many years, and on the back of a growing portfolio of projects and an increasing reputation in the region, opened an initial base in Birmingham last year,” said J Tomlinson CEO Mark Davis.
“Since then, as a result of further expansion, the company has outgrown the space and we are delighted to have opened a new headquarters at Canwell near Sutton Coldfield which will allow us to continue to serve our existing clients and to work with additional public and private clients in the West Midlands as we continue to broaden our portfolio.”
To coincide with the opening of the headquarters, J Tomlinson has been recruiting locally in the West Midlands and currently has new positions for a quantity surveyor and an assistant quantity surveyor, a site manager, an estimator and a trainee administrator, having recently appointed a range of other posts.
J Tomlinson, which is based in Nottingham and works across the West Midlands, East Midlands and Yorkshire, increased its turnover from £54 million in 2014 to £84 million in 2016. It employs more than 400 people.
J Tomlinson is working on a number of on-going contracts in the West Midlands, including being appointed to a four-year framework contract by Warwickshire Police and West Mercia Police which is now part of a joint property vehicle with four other public sector bodies known as Place Partnerships, covering servicing, maintenance, reactive repairs and minor building works.
Last year, the firm won a five-year contract to replace kitchens and bathrooms in around 1,600 properties in Birmingham, Coventry, Stoke, Walsall and Wolverhampton for housing organisation Midland Heart, and has a gas servicing and repair contract with housing provider and social organisation Bromford, providing services to over 10,000 properties.
The firm is also constructing a new 65-bed care home for Hamberley Development and a new building for Sutton Coldfield Conservative Club on the same site in Sutton Coldfield. Recently the company completed the mechanical and electrical work on the new five-storey, 6,500sq m headquarters offices for West Bromwich Building Society at Providence Place in West Bromwich.
The new office is headed by J Tomlinson construction managing director Martin Gallagher and offers the full range of services provided by the company.
For more information, visit www.jtomlinson.co.uk
The photo shows, left to right, Andy Morris, contracts manager, Toni Baker, office manager, Andrea Jones, business development manager, Martin Gallagher, managing director construction, Pete Woods, operations director.
Press release issued by Nottingham based PR company Perfect 10 PR www.perfect10pr.co.uk