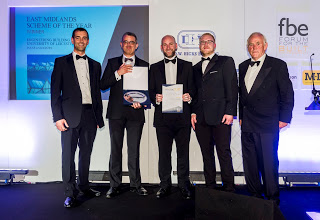 Nominated by Pulse Associates, who provided project management for the scheme, the work involved replacing 2,500 pieces of glass to the roof and façade of the Grade II listed, architecturally significant building and the creation of an internal environment fit for modern-day teaching needs.
Sponsored by building company DW Hicks, the award was the top accolade presented at the East Midlands fbe Chairman’s Dinner & Awards night, held at the City Rooms in Leicester, with the judges saying: “This was a truly deserving winner, based on the high status and complexity of the project, and the overall effort, costs and risks involved in securing the retention of a highly valued building for future generations.”
The scheme had earlier won the Regeneration Award sponsored by insurance expert Arthur J Gallagher. The judges said: “This was a highly complex retention and renovation of a listed, iconic and well-loved building. The intensive consultation and collaboration was to deliver improved performance and increased flexibility.
“Considering the building’s unique detailing and considerable works, the judges were impressive that the building remained in use throughout the works.
“Architecturally significant in its originality, aesthetics and structural engineering solution, the judges had to acknowledge the time and commitment to restoring the structure and retaining the celebrated design.”
The winner of the Residential Award, sponsored by building solutions firm J Tomlinson, was a Rural Housing Exception scheme at High Street, Brant Broughton in Lincolnshire, nominated by architects Halsall Lloyd Partnership.
Judges said of the housing scheme: “This development managed to achieve a high level of sustainability whilst not losing aesthetic appeal. The retention of existing site features and characteristics is admirable and shows a good understanding of its sense of place. The judges also noted its collaboration with the local community.”
The winner of the Non-Residential Award, sponsored by consultant development engineer M-EC, was Birkett House School, Wigston, Leicestershire, nominated by civil and structural engineer BSP Consulting and contractor Willmott Dixon Construction.
The judges said: “With its range of bespoke learning facilities that challenge previous norms, Birkett House offers well-designed and executed specialist facilities that were not currently met in the area.
“The integration of sustainable design into the teaching and learning process gives a strong and comfortable sense of place. Birkett House has been further recognised for its extensive level of collaboration and involvement outside of the construction team, the build being carbon neutral as well as its use of local labour.”
The Rising Star Award – presented to a young person under the age of 30 working within the construction sector in Derbyshire, Leicestershire, Lincolnshire or Nottinghamshire who has shown outstanding achievements in their field and which was sponsored by business and tax advisor Duncan & Toplis – was presented to Joe Gent, a trainee M&E quantity surveyor at Nottingham-based J Tomlinson.
The judges said of Joe: “The Rising Star category is always the hardest to judge and this year the competition seemed to be particularly stiff. It’s fantastic to see there are so many young people in the region achieving great things.
“Joe Gent secured the accolade because of the level of his accomplishments in such a short period of time. His achievements are commendable and it is clear that he is both a highly valued and well-liked member of the J Tomlinson team. In both his practical and academic work, Joe has shown hard work and dedication and has excelled in both areas. With his ambition and can-do attitude as well as the ability to build professional relationships and secure contracts at a relatively young age, Joe has been awarded the FBE Rising Star 2017 award. He has an incredibly bright future ahead of him.”
Around 130 professionals from the construction, property and development sector in the East Midlands attended the annual ceremony, which included a welcoming drinks reception sponsored by consulting engineer BSD.
Compèred by former England international rugby player and ex-Leicester Tiger player Peter Wheeler, the evening also raised £1,378 for the Wooden Spoon charity, an organisation dedicated to providing rugby coaching for disabled, or disadvantaged, children. The charity aims to positively transform the lives of young people across the UK and Ireland.
Eddie Mewies, regional chairman of the East Midlands fbe and MD of M-EC Consulting Development Engineers, said: “A huge congratulations to all the finalists and especially the winners of these awards, which highlight and reward the teams behind some of the best construction projects in the East Midlands and also shine a light on the young people who are showing outstanding achievements in their areas of work.
“The East Midlands fbe Awards give us the opportunity to recognise and highlight the great projects that are undertaken in this region, and I’d like to thank all the companies that nominated and took part this year.”
The fbe is a national organisation, with branches across the UK and is the longest established networking group for the property, development and construction industries. As well as running the annual awards scheme, the East Midlands branch also organises a number of social and other events. The East Midlands branch covers Leicestershire, Derbyshire, Nottinghamshire and Lincolnshire.
Photo caption left to right, Eddie Mewies, regional chairman of the East Midlands fbe, Nick Emmett from the University of Leicester, Ian Carey from Pulse Associates, Samuel Hicks, director at award sponsor DW Hicks, and Peter Wheeler, former England international rugby player and ex-Leicester Tiger player.
Press release issued by Nottingham based PR company Perfect 10 PR www.perfect10pr.co.uk