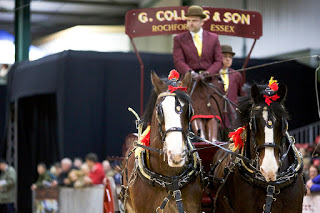 Shire Horse Show will be held at Staffordshire Showground from 16th to 18th March – and is expected to attract more than 250 pedigree Shire horses.

Organised by the Shire Horse Society, which will be celebrating its 140th anniversary in 2018, the event is a great day out for fans of the magnificent gentle giants of the horse world.

Visitors can watch the iconic breed being put through its paces in-hand, ridden and in harness- with the chance to find out more about Shire horses and their role throughout history. New for 2018 is the ridden quadrille – a choreographed ride to music which is often compared to an equestrian ballet.

“This will be the third year that we have held the National Shire Horse Show at Staffordshire Showground and we look forward to welcoming visitors and competitors to the event, which is regarded as the largest gathering of Shires anywhere in the world,” said Shire Horse Society secretary Victoria Clayton.

“The show has been held at a limited number of venues in England over its long history, and is believed to be one of the oldest, almost continuous, horse shows in the world, having been held for the first time at the Royal Agricultural Hall in Islington, London, in 1880, when the charity was named the English Cart Horse Society.

“Next year is a special one for us as a charity because it marks our 140th anniversary, and we hope that hundreds of spectators will join us in Staffordshire to celebrate, along with our members who do such a great job of preserving this wonderful breed, which is still regarded as endangered and needs our continuing support.”

Trade stand opportunities are available for traders who would like to have stalls at the event, which attracts thousands of competitors and spectators over three days of competition. A range of sponsorship opportunities is also available.

The iconic Shire breed was in danger of dying out just a few decades ago, and even now fewer than 500 new foals are registered every year by the Shire Horse Society. The charity has been running a Save Our Shires campaign to raise awareness about these gentle giants and numbers have steadily increased, thanks to the dedication of a band of enthusiasts.

Tickets for the 2018 show have remained at 2017 prices and have just gone on sale via the Shire Horse Society’s website www.shire-horse.org.uk

For more details and ticket information about the show,
visit http://www.shire-horse.org.uk or follow @saveourshires on Twitter or at https://www.facebook.com/shirehorsesociety/